Our family first got acquainted with this unique breed in the far 1993. Then we got our first pet, fluffy monthly lump “Gufi” from “Goldener Foyer” kennel. His life has flown before our eyes from the youth to the respectable age of thirteen, which according to our human standards is just a short period of time, but for the pet is his entire life. We are very grateful for the happiness and joy that he has given us, as well as protection in difficult situations. Owing to him, we have a bunch of friends, associates and fans of this breed. Gufi became the successor of the Russian leonbergers breeding, leaving a wonderful descendants. Furthermore, Gufi became a representative of the Russian Leonberger Club, and we are very proud of that its official logo contains Gufi’s picture. 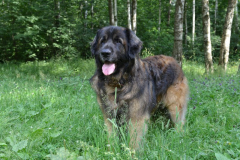 In 2007, from a distant dreamland Denmark from «KHAIMAS» kennel was brought a two-month boy, who was given the Scandinavian name «Odin I am the One», which means – just one. He subdued our family and everyone around with his gentle and friendly nature, his willingness to always go to the contact and wholly give oneself to people. Such a friendly type of character is unfortunately very rare and we are very lucky to have such a pet. 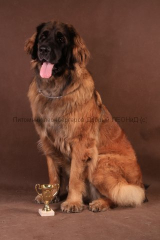 It is often said among the leonberger breeders that leos are never too much. In 2012 we got a beautiful brown-eyed girl named «Penelope» from «Galkino Gnezdo» kennel and officially established our kennel.

We hope that it is not an accident that you appeared on our site. We are always willing to assist and support the cultivation, rearing pups, and advise on the specifics of this breed anyone who is going or have already decided to buy a puppy.

See you on the pages of our site, where you can find some useful information, in particular about our scheduled matings and available puppies.